We spent all afternoon of day four coordinating Acoustic Alley sessions. The logistical nightmare of getting 16 very busy musicians’ schedules to align appropriately during the busiest music week of the year wore us out come five o’clock. We went to happy hour at Chapala Taqueria in East Austin, pounded 2 dollar margs, and reveled our accomplishment. Look out for videos from Ponderosa, Roadkill Ghost Choir, New Madrid, Foe Destroyer, and our van session with American Aquarium on this site in the coming weeks. 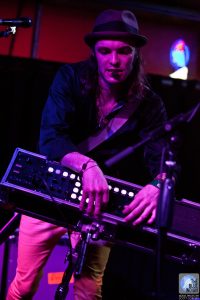 Yeah, we were late downtown because of the filming, but we were tired, so we apologize, but it’ll be worth it, we promise. Anyways, we went straight to see Cherub, a dance R&B duo out of Nashville that put out a favorite album of mine in 2012’s MOM & DAD. Having the shortened SXSW slot of only about 45 minutes meant they actually played mostly songs off their new EP 100 Bottles, though they did play crowd favorites “Doses & Mimosas” and “Monogamy”. The crowd was extremely obnoxious seemingly being incapable of sticking to what my Kindergarten teacher referred to as “personal space.”  It was much better near the back of the room, and the bar, The Iron Bear, had overhead cameras on the stage, so you got an interesting view of the duo playing and rocking on stage from a bar side spot.

After running late the night before and missing Fitz And the Tantrums,  priority Friday night was surely to be early and on time for their last performance. What happened? The only photographer at Cherub was the one for The Blue Indian. So the #1 rule of SXSW rings true, plans change. I literally had to go corner to corner on our map 10 mins before Fitz started only to get there at 12:02AM to find a line of 30 deep.  After the Akron/Family ordeal, I was worried but alas. The line moved with miraculous efficiency. Something I wish I had had seen more of thus far. I was happy to hear that the Tantrums are releasing a new album May 7th. Their first single sounds great, exactly what I would expect. Other tracks were much slower with heavier verses. They had total control of the packed Lustre Pearl. -Scott

David and I left after this set to catch Philly based Vacationer, while Scott went to the other side of Austin to see Fitz & the Tantrums. The Vevo control room was a neat space with a ridiculous maze to enter and exit, but nonetheless we got in easily and got right up by the stage to hear this 5 piece melody driven chill pop music that make me yearn for white sandy beaches. I admit to being a mild fan-boy and gleefully singing along to the tunes I recognized off their 2012 LP Gone. We probably could have made it to another show, but we were beat, so we found Scott, who finished his own adventure (see above) and headed home after a long day 4.