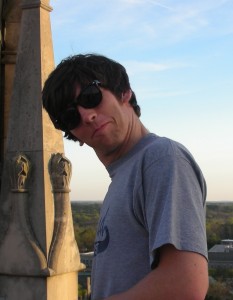 Chris is currently a graduate student in the Divinity School at Duke University in Durham, NC.  When school's not in, he's either in the kitchen or in the coffee shop.  Music-wise, he actually really likes the three Dylan records made between 1979 and '81.  He has his folks to thank for his uncanny affection for The Beatles, Three Dog Night, and Tom Petty & in the last 5 years has built on this Gibralter-like foundation with a slew of beloved North Carolinian acts including the Avett Brothers, Roman Candle, The Old Ceremony, the Drughorse Collective, Luego, and Brett Harris. “Keep your eye and ears on this young band, such a mature debut can only lead to yet unexplored, dreamier, more expansive vistas.” -CB Arthur Alligood’s “I Have Not Seen The Wind” luz’s “Light, Among Other Things”

“Interspersed with screeching atmospheric guitar and affective ambient noise, the EP is an offering from an honest young artist to do just this.” -CB So, TBI writer, Chris Breslin, gives The Tomahawks new record a 9 out of 10. What! “‘Tender Age’ tells a tale not of novelty, youth, or immaturity, but of sly security, adroitness, and versatility.” -CB